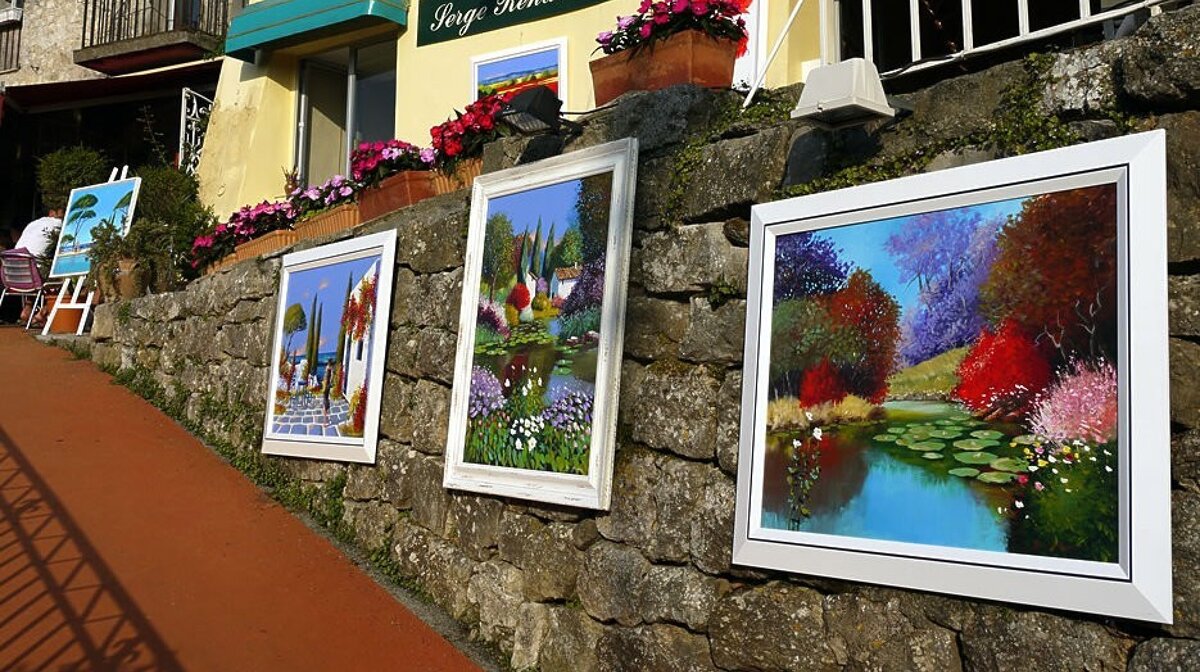 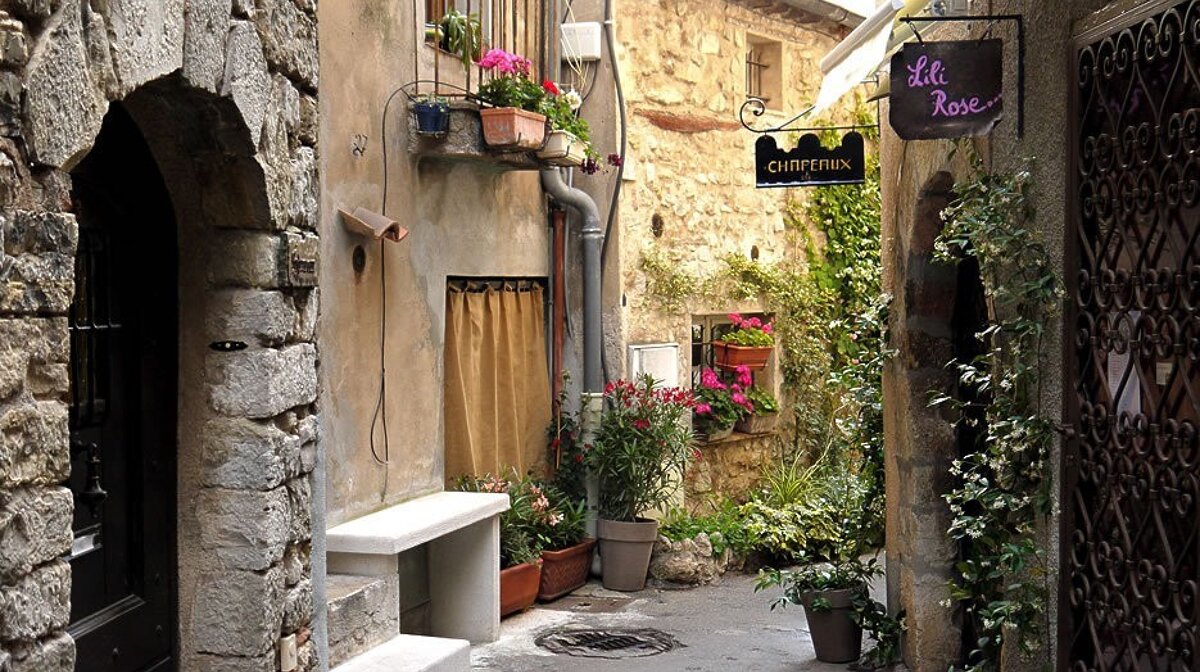 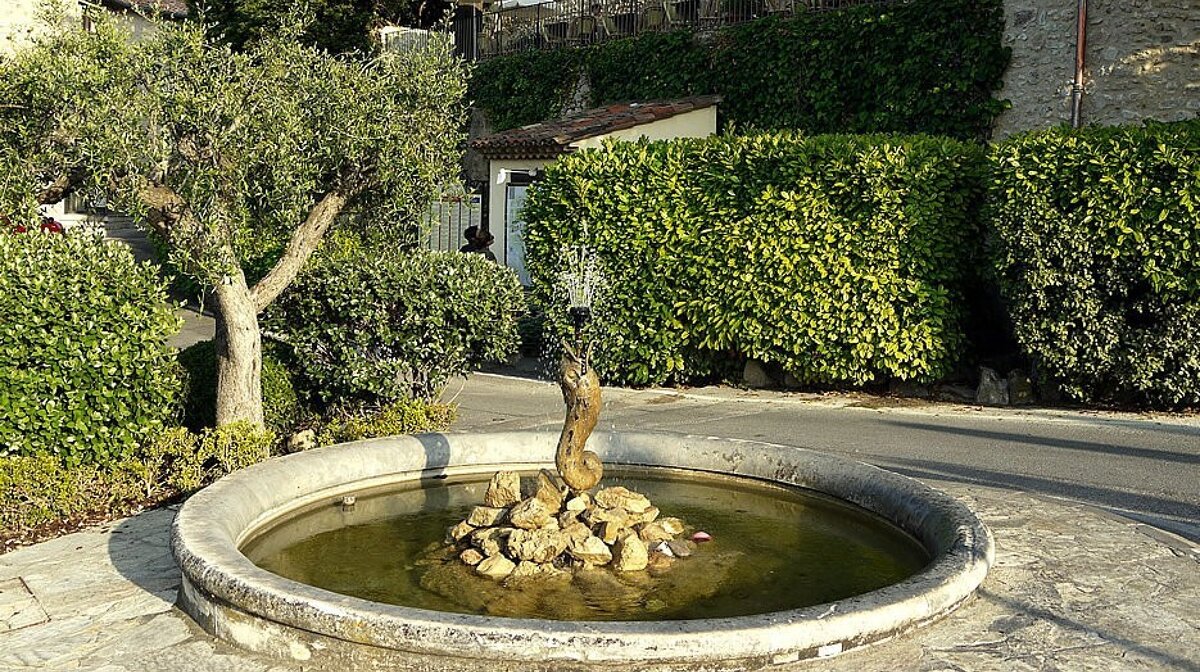 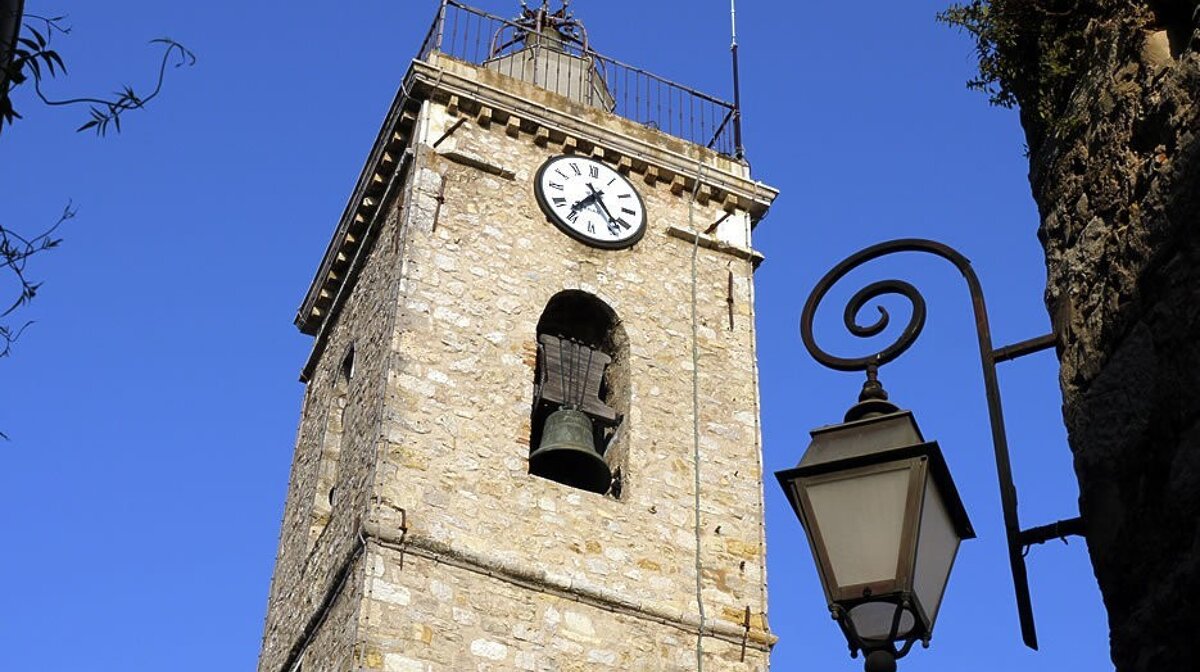 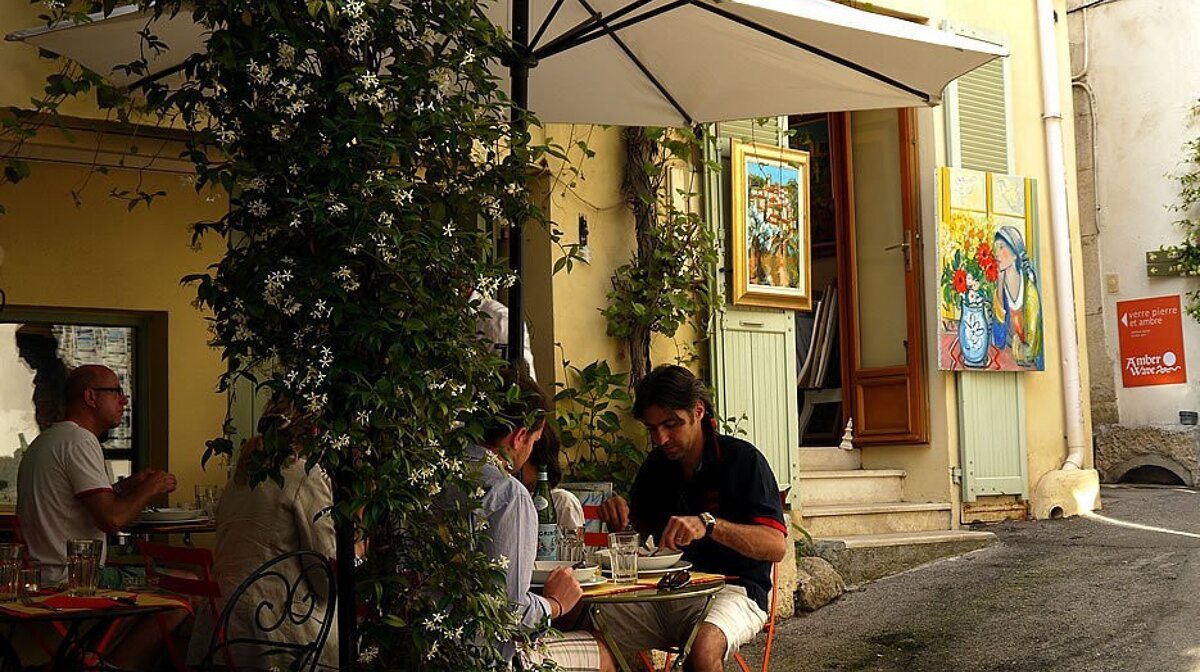 Mougins covers a large swathe of hillside above Cannes, and is where the smart money lives. Close enough to enjoy Cannes, but away from the craziness, luxurious villas and exquisite gardens dot the landscape.

The old town (Veille ville) is where you should head on a day trip. Park up and wander into the medieval village. The town is smothered in jasmine, it's fragrance heady on balmy summer nights. Mougins is totally pedestrianised and is a joy to explore with fountains and sculptures adorning the streets and the plentiful art exhibitions are guaranteed to keep the casual browser enthralled. You can happily wander through the pretty little lanes, and admire the well kept houses and gardens before choosing one of the many restaurants for a long leisurely lunch. Remember to book ahead in the summer months to ensure a table on the terraces.

The hilltop of Mougins had been occupied since the pre-Roman period and was eventually absorbed into the spread of the Roman Empire. Much of the centre of the 'old' village dates back to the 11th to 15th centuries.

In the 11th century the Count of Antibes gave the Mougins hillside to the Monks of Saint Honorat (from the nearby Îles de Lerins just off the coast of Cannes) who continued to administer the village until the French Revolution. During this period, Mougins was a fortified village surrounded by ramparts and parts of the medieval city wall still exist as well as one of the three original ancient gate towers (Porte Sarrazine).

Today this charming little village is best known for its gastronomy and the artists that it has attracted over the last 100 years. Picasso lived the last 12 years of his life here (1961–1973) until he died, in a house next to the chapel of Notre Dam de Vie to the south east of Mougins. Picasso's studio was in the old village in a building that is now the tourist office.

It's strong culinary history is due to great chefs such as Roger Vergé and Alain Ducasse, who have both managed restaurants in the village. Both were synonymous with the restaurant L'Amandier, which is situated in the heart of the old village. This restaurant still exists today and is housed in an important ancient building, as during the Middle Ages this was the court house of the Monks of Saint Honorat, before becoming an almond mill in the 18th/19th centuries. Mougins hosts the annual 'International Gastronomy Festival of Mougins', or 'Les Étoiles de Mougins', an international gastronomic event taking place every September in the village.

There are several art galleries and museums in Mougins and all are worth a visit. In particular the Mougins Museum of Classical Art has one of the largest private collections of antiques that span vast periods of time and is beautifully curated. Also worth a visit is the Photography museum, located in the centre of the Old Town, which houses a display of antique cameras and equipment, alongside a collection of photos of famous painters and artists, including Picasso.

Things to Do in Mougins

Wandering and exploring in the medieval town centre is a great way to spend your day in Mougins, enjoying the small winding streets, fantastic architecture and rich history of the area. Whilst stopping for a snack or coffee in one of the many cafes, viewing some modern or contempory art in one of the galleries and finally topping off your day with a delicious dinner in an elegant restaurant.

But while you are in Mougins it is also worth taking the time to enjoy the calm oasis that is the Etang de Fontmerle, the Lotus Pond. This is a very special place where you can spend hours strolling and enjoying the peaceful surrounding in this nature park.

Or if you prefer to be a little more active during your stroll through nature then why not visit the Royal Mougins Golf Club or the Golf Country Club de Cannes, both of which are situated in Mougins.

Where to Stay in Mougins

There are some fantastic places to stay in Mougins. Most of them are luxury hotels, but they still offer better value than Cannes.

Where to Stay in Cannes