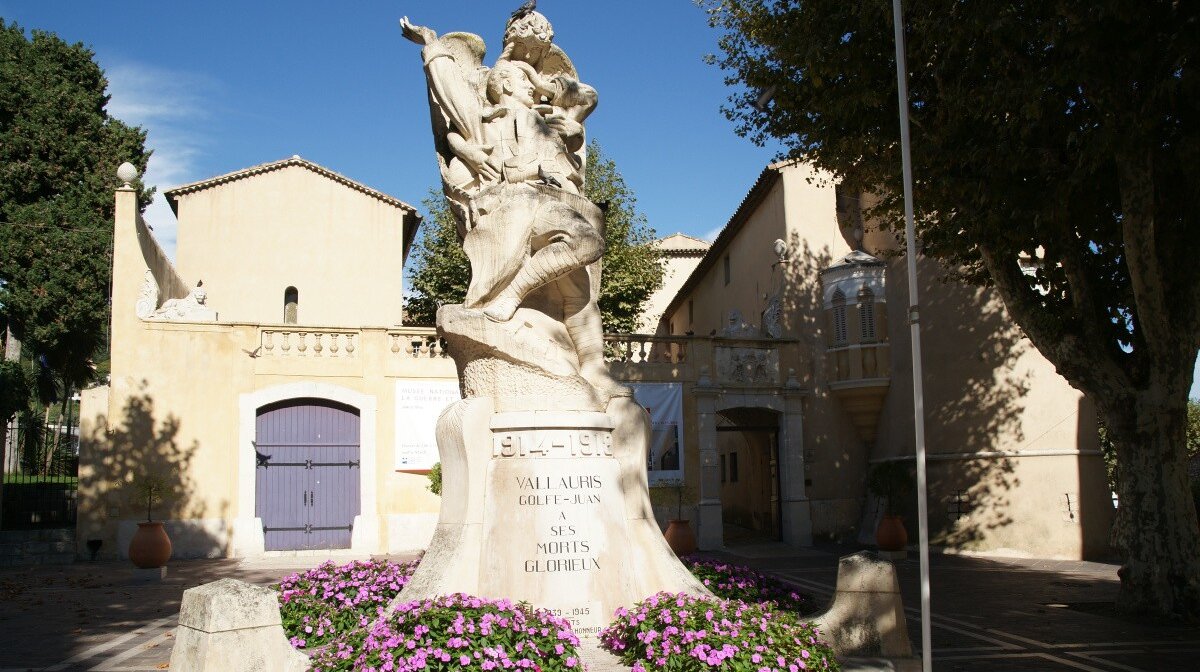 The commune is known as Vallauris Golfe-Juan, combining the traditional charm of the pottery capital of the Riviera, Vallauris, which sits inland, with the sea side resort and sandy beaches of Golfe-Juan.

It most recently came to prominence when Picasso lived here from 1948 to 1955. He created many sculptures whilst here and encouraged local artesans to embrace ceramics and re-introduce local pottery traditions from the 17th century. Workshops, galleries and boutiques continue the pottery heritage today. The Municipal Museum of Ceramics is housed within the Chapel of the Castle and also contains Picasso's 'War & Peace' fresco.

Golfe-Juan is perfectly located in the Cote d’Azur, in a large bay just a short distance from Juan les Pins and Antibes, in between the beautiful cities of Nice and Cannes. Made up of narrow wonderful sandy beaches this bay is home to many large yachts with its popular marina, Port Camille Rayon, being the hub of this beautiful town.

Full of history, culture and arts, you can discover the beautiful ceramic pieces that Golfe-Juan and Vallauris are famous for.  With a host of galleries and museums, beautiful architectural buildings and traditional workshops you can soak up the culture and history of this area.

Wander the streets and enjoy the charm of this French Riviera port. In the daytime the beaches are lined with umbrellas and people enjoying the sun, sand and beautiful blue sea. At night time the town turns into a hub of restaurants, bars and clubs; with the tourists and locals sitting down to enjoy a long leisurely Provencal dinner and the young chic fashionable crowds sipping on cocktails looking out at the port.

The town of Vallauris was created in 1501 to a very specific grid style as a defensive strategy to protect the town from invaders. A castle was then built in 1568 on the site of a previous monastery. The area was particularly active during the 1800's with the landing of Napoleon in 1815 at Golfe-Juan, the first train arrival in the area in 1862, pottery making reaching its height during the latter half of the century and the building of the port in 1896.

With Picasso's influence during the 1940's and 50's, and the gift of his famous sculpture 'War and Peace' to the French State, Vallauris was given a national museum and later opened a public art gallery.

Golfe-Juan is very much linked in history to Juan les Pins and Antipolis, or Antibes as it is now known. The early history of Golfe-Juan is rather lost in time, and not much is known about what happened in the first few centuries. However it is known that in 1480 the Antibes region was riddled with the plague and a huge number of the population were wiped out, leaving many towns and cities to start again.

In 1501 Vallauris and Golfe-Juan were occupied and started to rebuild once again, encouraged by Lord Raynier, families from neighbouring Italy settled in the area and it slowly started to repopulate and become a bustling village. In 1568 the castle of Vallauris was built in a Renaissance style and still stands today as a monument to the Renaissance time.

The beautiful Port Camille Rayon was originally built in 1896 opening up the whole area to shipping trade and creating a new dynamic for the Golfe-Juan and Vallauris.

Vallauris Golfe-Juan is now soaked in culture, with artists and elites residing here. Picasso created many exceptional art pieces during his time here, including  his ‘Temple of Peace’ and the ‘War and Peace’ monument painted inside the temple. With a history of ceramic and pottery art this region is known for its artists and creativity, remaining a popular spot for artists of many trades today.

Head to the castle of Vallauris, which has been converted into a collection of museums and galleries. Visit the National Picasso museum with the famous Picasso mural called ‘War and Peace’ in the castle's chapel. Picasso created over 4000 ceramic works during his time in Vallauris; there are many of his works and famous plate series on display here. The Magnelli Museum sits in the most modern part of the castle and is a combination of Alberto Magnellis abstract artwork. Back in the village there is a bronze statue by Picasso called Man with a Sheep, which Picasso insisted children be allowed to climb upon (which they do.) Finally, visit the Ceramics Museum which houses a number of historical and fascinating ceramic collections. Back on the coast in Golfe Juan, see the start of Napoleon's famous 'Route Napoleon' at the statue 'Napoleon's Column';each year in March the town of Golfe Juan celebrates Napoloen's landing with a parade and renactment.

The beautiful sandy beach at Golfe Juan provides the perfect place to spend a day soaking up the sun, splashing in the sea and watching the sunset, perhaps with a cocktail in hand.There are a number of excellent beach clubs with restaurants, or grab a picnic and head to a public stretch of beach. You can also try your hand at water skiing, banana boating, wakeboarding and other water sports and the bay of Golfe-Juan is a popular dive spot with numerous dive sites nearby.

Perhaps one of the most popular events in the annual calendar of Vallauris Golfe-Juan is the celebration and re-enactment of the landing of Napoleon.

If markets are your thing then you are in the right part of France, the Cote d’Azur and Provence are known for their fantastic markets. The food market is held every day except Mondays in the mornings in the centre of Vallauris at Place Paul Isnard and you can browse the stalls for fresh fruit, plump olives and wonderful Provencal meat.  For fresh fish caught that morning head down to the old port nice and early and depending on the fisherman and their catches you can pick up some delicious catches from that day. Antibes is a place known for its creativity and arts and in peak season in July and August you can stroll the promenade in the evenings and experience a market full of artistic pieces and craft goods bought from the artists themselves.

Things to Do in Vallauris Golfe-Juan

There is plenty to do when in Vallauris Golfe-Juan, being a busy port and a hot spot for holidaymakers there is something to keep everyone entertained. Not only can you browse the local markets, enjoy the shops and spend hours lying on a beach soaking up the sun you can also explore some of the museums and learn more about the history of this seaside area.

Situated right next to Juan les Pins, Anitbes, Nice and Cannes you can explore the surrounding area simply by hopping in your car or catching a bus. The wonderful coastline stretches out for miles, hire a bike, explore on foot or just take a coastal drive to discover the beautiful scenery. We highly recommend going into the hills of Cap d’Anitbes and exploring some of the beautiful villas and houses tucked into the hills with fabulous views stretching out over the Mediterranean. Another great way to see the area is on a hire a scooter! The perfect way to enjoy the warm summer air, sea breeze and to explore the coastal areas and up into the Provencal countryside villages.

If you are after something more active head to the coast and enjoy a number of water sports, try your hand at water skiing, banana boating, wakeboarding and other water adventures. The bay of Golfe-Juan is a popular dive spot, with numerous dive sites near by, so why not try out some of the local diving school and see the area from under the water... The beautiful sandy beaches and blue sparkling Mediterranean provide the perfect place to spend a day soaking up the sun, splashing in the sea and watching the sunset. There are a number of excellent beach clubs with restaurants or grab a picnic and head to a public beach. Children and families will also enjoy Marineland waterpark which is a short drive from Vallauris Golfe-Juan where you can see creature of the sea, watch an animal show, enjoy some thrills on a water ride and play adventure golf.

If you want to discover more of the French Riviera or ocean then what better way to explore than by hiring a boat or yacht for the day. There are a number of luxury companies who will take you along the coast exploring the ocean and neighbouring famous towns such as St Tropez. Anchor out at sea and enjoy a Mediterranean lunch in the peace and calm of the ocean or hop of the boat and explore the towns and villages.

Golfe-Juan has a range of restaurants, from the relaxed and trendy beach restaurants to those restaurants serving fresh Mediterranean cuisine in a traditional and romantic setting.

Le Café du Coin is located on a quaint little street in the centre of Vallauris. With tables laid out on the cobbled street and a cosy interior you will enjoy fresh Mediterranean food. The menu changes daily depending on the local ingredients available and the prices are reasonable for the area. The welcoming staff and friendly owners add to the charming feel of this restaurant.

For dining by the sea head to Le Bistrot du Port. Sitting right on the port of Golfe-Juan you can enjoy the local fresh seafood and traditional Mediterranean style dishes. The menu is comprised of fresh local ingredients presented beautifully.  With a lunch menu available it makes for the perfect spot to have a long lazy summertime lunch whilst sitting on the terrace watching the boats coming in and out of the port.

Restaurant Via Cassia sits nestled on the port with a stunning terrace and excellent views over the Mediterranean ocean. Creating traditional seasonal dishes with a modern twist and using only the best ingredients you can enjoy a leisurely lunch or watch the sunset and enjoy a cosy seaside dinner. With a kids menu and a huge variation of dishes it is great for groups, families and couples looking for a romantic spot over the port.

Where to Eat in Cannes

Ideally located on the coast of the beautiful Mediterranean and with the town of Vallauris sitting in the hills behind it there are plenty of lovely places to stay that provide peace or calm or put you in the heart of the bustling port.

Golfe Juan and Vallauris are home to a number of cosy and beautiful B&B’s that provide exceptional comfort and reasonable prices. Heading up into the hills behind the port you will find the wonderful Villa le Port d’Attache. This lovely Provencal style guesthouse has a large terrace with incredibly beautiful  views out to the Mediterranean one way and to the snow peaked mountains the other. The elegant and chic décor, comfortable rooms, the breathtaking views and excellent amenities make Port d’Attache a truly special place to stay.

Le Mas Samarcande is another great B&B nestled just near the coast in the hills outside of the bustling port of Golfe Juan. Spacious and yet cosy rooms combined with beautiful views from the balconies make this a great place to stay. Being so close to the centre of both Vallauris and Golfe Juan you can head to the local beach to soak up the sun or explore the port and town.